El Markhor It is a large species of wild goat that is found in northeastern Afghanistan, Pakistan, some parts of Jammu and Kashmir, southern Tajikistan and southern Uzbekistan. The species is listed by IUCN as endangered, because there are fewer of 2.500 mature individuals . Thanks to hunters and scientists have created conservation programs the population is increasing especially in Pakistan , The Markhor is the national animal of Pakistan.

The colloquial name is thought by some to be derived from the Persian word sea, which means snake and Khor, means “eat”, which is interpreted sometimes not represent the ability of the species to kill snakes, or as a reference to its corkscrew horns , that are somewhat reminiscent of rolling snakes. According to folklore, markhor has the ability to kill a snake and eat it. Thereafter, while rumination, foam-like substance out of his mouth, it falls on the ground and dried. This foam-like substance is wanted by local people, they believe is useful in extracting snake venom snakebite wounds.

You have to cross 65 a 115 inches , 132 a 186 inches long and weigh 32 a 110 kilograms. They have the height to the highest maximum cross between species of the genus Capra, but is surpassed in length and weight of the Siberian ibex. The coat is grayish, brown to black, and is smooth and short in summer, while the longer and thicker growth in winter. The skin of the lower extremities is black and white. Markhor presentan sexual dimorphism, with males having longer hair on chin, throat, chest and legs. Only Suleiman Markhor has no hair on the throat , grows a large plume of black color comes from the chin. Females are redder color, with shorter hair, short black beard. Both sexes have tightly folded, spiral horns, together at the head, but extend upward, towards points. The horns of males can grow up 160 cm long and up 25 cm in females. They have a pungent odor, that exceeds that of the domestic goat.

Markhor are adapted to mountainous terrain, and is among the 600 and 3.600 meters. They live in mountains, forests composed mainly of pine and juniper. Son diurnos, and move in the early morning and evening. Their diets change seasonally: periods in spring and summer grazing meadows and winter, sometimes standing on their hind legs to reach the highest branches. The mating season occurs in winter, during which the males fight each other .

The gestation period lasts 135 a 170 days, and usually results in the birth of one or two animals, although rarely three. The Markhor live in flocks, numbering usually nine animals, composed of adult females and their offspring. Adult males are largely solitary. Your alarm call closely resembles the bleating of domestic goats. Early in the season the males and females may be found together. Summer, males remain in the forest, while females generally climb to the highest rocky ridges .

There are four or five recognized subspecies of Markhor: 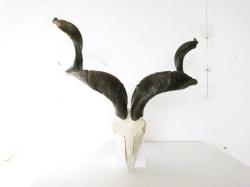 Location: The region of Gilgit in northern Pakistan on the slopes of Nanga Parbat and along the Indus River and its tributaries , Gilgit including rivers , Astor y Hunza . Along both banks of the Indus upstream Jalkot about sand fleas near Skardu . Along the Gilgit as early Gakuch . Along the valley Astor until Parashing . Throughout Hunza whenever Chalt .

Shoulder height of this goat is as much as 42 inches and weighs about 200 a 225 pounds . A large markhor . This is the typical race which was first described the species. The coat is long and thick in winter, although with little underwool , and is much shorter in summer. Gola male is long and fluid . Generally, Astor markhor horns blow very widely over the base and have one to 1-1/2 turns , with the first turn to be very large. They are huge and spectacular, although usually not as long as the Kashmir markhor. Most horns in the range of distribution of the Astor markhor are of this type , however , Cashmere type horns are also observed with less glare and round . 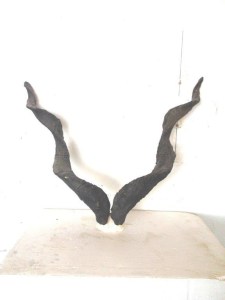 Location: Afghanistan: Laghman province and river area Bashgul. Pakistan: distrito de Chitral, along the Kunar River from Shogore to Arandu on the west bank and the east bank Drosh, and its tributary, the river to the extent matuj Barenis; Dir Distrito, along the upper course of the river Panjkora, and Swat district in the cliffs east of Mankial. India: La Shamsberi, Kaj-you-de Nag, y Pir Panjalu rangos.

A large markhor with huge horns that are usually the longest of the species. The coat and collar are similar to those of the Astor race. Typically, Kashmir markhor horns have mild to moderate flare with 2-3 spirals. Most horns within its range are of this type, however, straight horns kabul type have occurred in the district of Chitral. 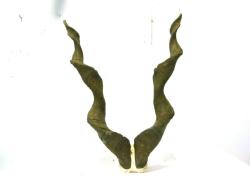 Location: Formerly, Most of the mountains along the north bank of the Amu Darya and higher Pyandzh rivers from Turkmenistan to Tajikistan. Now reduced to scattered populations in the range Kugitang extreme eastern and south-eastern Turkmenistan, Uzbekistan, in the area between the rivers Vakhsh and Pyandzh in southwestern Tajikistan, and in the northwest part of Darwaz Peninsula of northeastern Afghanistan, near the border between Tajikistan.

The horns are relatively straight and in the form of a tight corkscrew bold. This subspecies is the one seen in zoological parks and playgrounds around the world.

Its size and coat is very similar to Astor and Kashmir , but adult males but dark , born beard from chin to feet , adult males in the winters are very long . 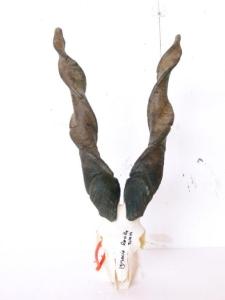 In Afghanistan , at least until 1978 , this markhor survived only in the Kabul Gorge and the Safi Kohe Kapissa , and in some isolated pockets in the middle. Intensive hunting pressure had forced the most inaccessible regions of its range , una vez más amplio in las mountains of Kapissa y Kabul Provincias. In Pakistan, the most comprehensive study of the distribution and status of markhor horns coming straight from Schaller and Khan ( 1975 ) . They showed a great variety of recent past this subspecies , but the current range in Pakistan is only in small isolated areas in Baluchistan , a small area in NWFP , and unconfirmed occurrence in Dera Ghazi Khan district ( Punjab province ) . Virk ( 1991 ) summarizes the actual information in the province of Baluchistan , and confirmed the presence of the subspecies ‘ in the zona del Koh- i- Sulaiman (Distrito Zhob ) and hills Takatu (Distrito Quetta ), both according to Ahmad ( 1989), and the hills Torghar Toba Kakar range (Distrito Zhob ) ( Tareen , 1990 ) . El Forestal Department of NTFPs (PFNM , 1987 ) considers that the areas of Mardan and Sheikh Buddin were still inhabited by the subspecies . No real information about the range of Safed Koh (Distritos de Kurram y Khyber ) where , según Schaller y Khan ( 1975 ) , This subspecies is smaller than all of its species , summer fur is brown and dark winters to come to Grizzlies , will not grow a beard in the neck has single tuft growing on his chin

Some authors have postulated that the markhor is the ancestor of some breeds of domestic goat. The Angora goat has been considered by some as a direct descendant of Markhor Central Asia. Charles Darwin postulated that modern goats arose from crossbreeding markhor with wild goats. Other authors have reported the possibility of markhor being the ancestor of some breeds of goats Egyptians, because of their similar horns, despite the lack of a keel on the anterior horns of the markhor belie any close relationship. The domestic goat of Ladakh and Tibet changthangi resulting from the markhor. It is believed that Girgentana Sicilian goat that was generated from markhor, like the cranberry goat Ireland. Wild herd Kashmiri search 200 people in the Great Orme limestone headland of Wales are derived from a herd maintained at Windsor Great Park belonging to Queen Victoria.

In British India, markhor is considered one of the most challenging game species, because of the danger that lurks and seeks in high, mountainous terrain. Según Arthur Brinckman, in his The Rifle in Kashmir “, a man who is a good traveler will not want for any fine ibex or markhor sport “. Elliot Roosevelt wrote of how he shot two markhor in 1881, first the 8 July his second in 1 August. Although it is illegal to hunt markhor in Afghanistan, have been traditionally hunted in Nuristan and Laghman, and this may have intensified during the war in Afghanistan. In Pakistan, the markhor hunting is legal. However, recently, as part of a process of conserving, hunting licenses are available on the Government of Pakistan to allow hunting of old markhores that are not good for reproduction , with a control between hunters and scientists. In India, still hunted the markhor Spot, near the border with Pakistan. They are still hunted for food and for their horns, believed to have medicinal properties, in Tajikistan, Turkmenistan and Uzbekistan is closed hunting ,without control by the government and poachers are raging, the few that remain are preserved in national parks, without management. In 2014 Tajikistan's government with the help of CIC and scientists have decided to hunt 6 adult animals by a very high price for their conservation. The Markhor have also successfully introduced a private game in Texas.