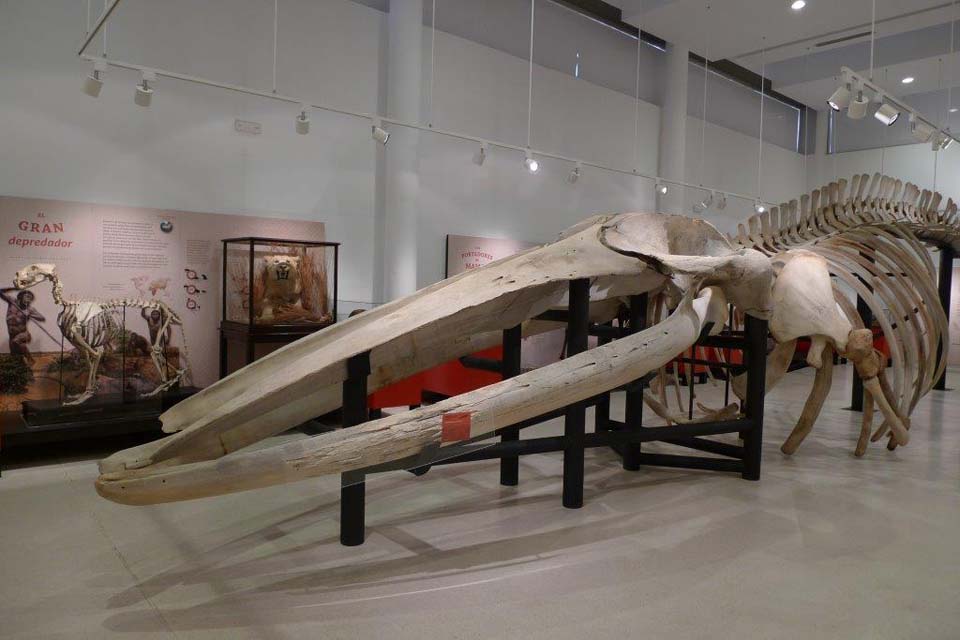 WHALE OF SCIENCE MUSEUM OF YEBENES

WHALE OF SCIENCE MUSEUM OF YEBENES

It was once one 28 June 1832 when two sailors caught a whale ninety feet (Balaenoptera muscudus) in the Gulf of Rosa. She was sold to the science museum in the amount of 1.000 pesetas. Don Mariano de La Paz identified Graells to be armed and forth in comparative anatomy room with three other.

Years passed and they were stored, rigorously ordered and laziness or lack of space were not armed. There is no document that why arm them exposed. Mr. Graells died and those bones like he fell asleep.

They followed each lot in Spain, to a civil war, years in which great teachers marched through the museum. No one knows the reason why these skeletons are not mounted . In 1970 Don Adrián Casinos try to reorder , Bookmarking and mount. Came to nothing as it was not available at that time sufficient information for assembly, perhaps thereby possibly causing, inexperience.

The bones of those whales were dancing around the museum. There are photos taken in the year 1980 where they were improperly stored in the courtyards of the museum. Says, according relate naturalized animals, Some bones were used as backfill concrete in the work of this "magnificent" building made in the courtyard of the museum. In 1991 hindered and not interest as bones in a museum as we were before the modern era of plastic were taken to a store. Deposited in a cold and old ships in Arganda del Rey where some were outdoors, other in bathrooms between cups and other objects wastage over time, a new home for those whales that went dormant in oblivion ...

It would be due to reports of several workers in the science museum and the newspaper the country where those bones woke remembering them in the year 2007. The frightened and alerted gave money to political science museum for restoration. A collection of birds and other mammals was in very poor condition due to neglect and the fact that stuffed animals were not fashionable. Grateful to her companions, whales, Iban these animals to be able to be restored.

The following year the Museum of Natural Sciences in Madrid chose us to restore 3.400 specimens and for fleshing and ride a whale that washed up in Marbella. Restored 3.800 of the 3.400 we had to restore at first. The whale did not want to make. Some of these restored animals were exposed in the museum, like the elephant who performed the master Luis Benedito or actual saber made another master, July Paton, and tigers to hunt through the safari club Artaza International chapter Lift, a group of hunters Valencia. Others were not so lucky and returned to stores arganda along with the skeletons of whales that seemed looking at us, patients, like you wait your turn to be restored.

It could not be for lack of money, poor bones thanks to them, we were able to clean the dust and heal the cracks of his colleagues. There were, between these walls lying grimy, Again abandoned but not forgotten

In 2010 Taxidermy Garoz propuso D. Jorge Lobo can recover these whales and other mammals and birds can create museums in Spain financed on a shoestring, and if it could be, the private sector and the science museum does not have enough facilities for exhibition. Jorge, man with a lot of initiative and tenacity convinces Esteban Manrique, director at the time of the creation of MNCN Science Museum - The Yébenes, a branch of the museum itself, while we do not have to convince the mayor because he was convinced that this project would be very good for our people.

Our team of taxidermists helped us with transportation Madrid-Los Yébenes Whales. It was necessary to make this work using a crane and four trucks that were bringing in a total of eight copies of five different species. Once in Los Yébenes classify them and then come Jorge Lobo, Luis Castelo, Arturo Morales and Laura Llorente to double check that all was well qualified avoiding errors, each piece belonging to the species, of cuale were discovered five different : Blue Roncual , Whistling Roncual , Yubarta, Austral whale and sperm whale. Of these the MC-9 was chosen, was the most comprehensive parts and larger. Were labeled and ordered the rest of the poor and those bones back again Arganda stores, at least they were now sorted and placed on order. Back to waiting for someone to want to pick up the slack and carry them somewhere in Spain for awakening them exposure and another long sleep.

The MC-9 once ordered and classified, with little strength but always with great enthusiasm and little money we got to clean. He disappeared smoke and mold that enveloped. After solidified bones and assemble a design support to stay in the science museum The Yébenes for the rest of our lives. One at least has finished its long journey staying awake forever.

We again thank our reiterarnos : Esteban Manrique, Jorge Lobo, Luis and Luis Castelo Garoz for their support and insistence that stuffed animals are exposed at the museum or at venues MNCN.

MUSEUM OF HUNTING AND NATURE OF PARIS